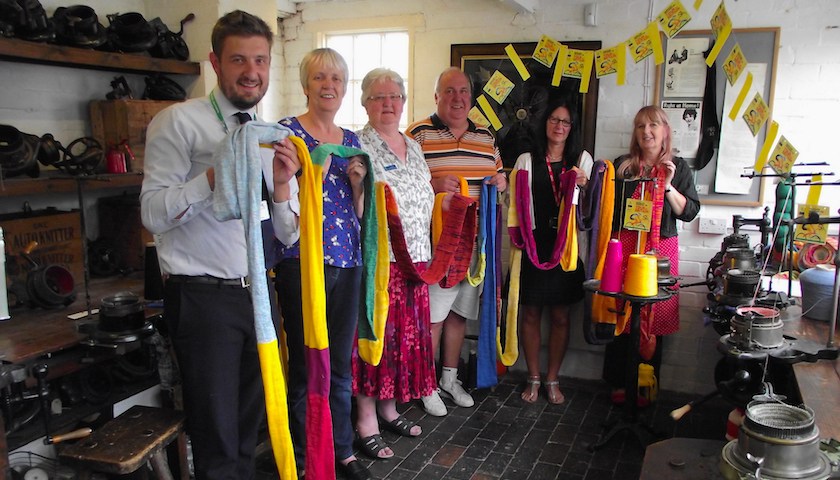 Given Ruddington’s famous framework knitting heritage, what better way to showcase our village to the world than by displaying a giant knitted scarf created by its residents on a vintage circular sock knitting machine dating from 1860?

At least, that’s what Framework Knitters’ Museum Assistant, Helen Brownett, thought when she came up with the idea! Helen says: “I do make quite a few scarves for the different events we have around the museum, to string up across the buildings and in the workshops. So ‘a scarf along the street’ came into my head as a way of greeting the riders in the Tour of Britain. In the 19th century, half the Ruddington population were knitters, so it just seemed quite appropriate.”

This most “Ruddington” of creations is, of course, to be put up along the route that 120 of the world’s top riders will be taking through our village during the penultimate stage of this year’s OVO Energy “Tour of Britain” cycle race on Saturday 8th September.

These will include Tour de France winner Geraint Thomas and fellow Brit Chris Froome – racing together in this prestigious event for the first time since 2009. Between now and then, visitors to the museum are getting the chance to sit and turn the mechanical handle to knit their own section of the unique scarf in their chosen colours – although there’s a deliberate predominance of yellows to match the overall cycling theme.

“On the day, the scarf will be put into The Frame Breakers pub – still attached at one end to the machine – go out of the door and be draped along the High Street” explains Helen. Everyone’s handiwork is likely to be seen by a global TV audience of millions. The idea of an excessively long scarf has another amusing Ruddington connection – as a favourite garment worn by the 1970s incarnation of Dr Who played by former Ruddington resident Tom Baker!

Museum Manager and Curator, Nicola Wood, told us the scarf is already 85 feet long as of mid-August! “By the time of the cycle race, we expect it to stretch over 200 feet! We’ve had people from as far afield as China turning that wheel and helping create it. If you want to come along and join in making the knitted scarf there’ll be no museum entry fee – just let them know at reception and we’ll bring you in to have a go!”

You can knit a section of scarf at any time during the museum’s Opening Hours, up to and including Friday 7th September.

For full details of the Tour of Britain cycle route – and other ideas of how to get involved – you can go to www.rushcliffe.gov.uk/tob.

With grateful thanks to Graham Wright via RUDDINGTON.info

We use cookies to ensure that we give you the best experience on our website. If you continue to use this site we will assume that you are happy with it.Ok